As you may have seen, I've posted more in the last 2 weeks than I did in the prior 2 months.  Part of that has been catching up on the ever-growing stack of incoming packages on my card shelf.  Usually that means dealing with one package-per-post, but I'm not gonna do that when I have FOUR packages from Wes from Jaybarkerfan's Junk.  If you aren't reading his blog yet....HOW have you missed out this long?  He's a super-generous dude here in the blogosphere and has run some fun card-drafts, too.  I gotta post my favorites in honor of all he's doing out there for the people.

NUMBER ONE
First package was one of his PWE BOMBs. Teahen looks downright regal in this card from UD A Piece of History.  I think he should be on the $2 bill or something.

NUMBER TWO
The second package was from one of his card drafts. 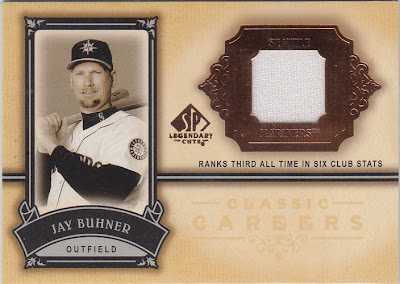 I used my first pick on this Jay Buhner relic.  Not really sure why, but it was neat.  :-)  Anyone want it?  It's for trade. 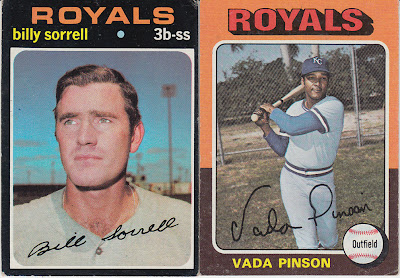 Next, I picked up a few vintage Royals.  I'd never heard of Billy Sorrell, but that didn't stop me from pulling the trigger.  One of the nice things about cheering for a team that has only been around since 1969 is that you don't have to get bogged-down with all the old players from before you were born.  Just think if you were a team collector of the Yankees or Cubs.  You'd have to be on the lookout for everything starting with the turn-o'-the-century.  Not my problem.  I can mostly stick with the '70s and up. 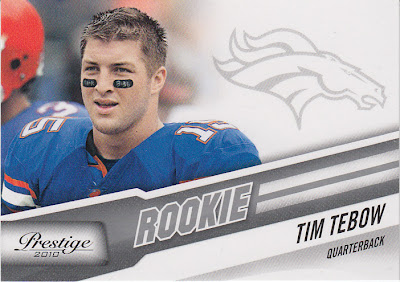 TEBOW!  I'm pretty sure JBF just threw this one into the draft pile since he knew I would jump on it.  Love me some Tebow. 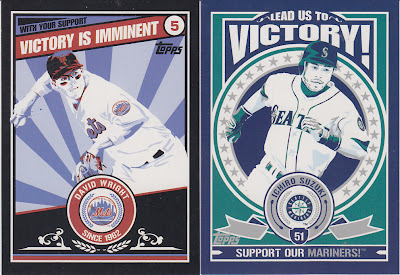 Here's a few "Propaganda Posters" that I grabbed since I thought they looked cool.  Any David Wright or Ichiro collectors need these?  They're for trade. Here's a Deion Branch that I grabbed for my buddy, Raj.  It's X-Fractory.

Finally from this package, as my last pick I was able to grab a Rafael Palmeiro Pepsi card.  On this one, Pepsi is claiming to be the "Flavor of Baseball."  Call me crazy, but I always thought that the flavor of baseball was "Leather and Cork."  I guess we'll agree to disagree on this one. 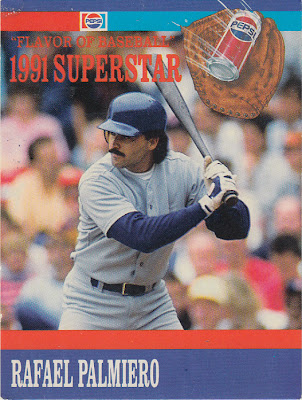 (Oh yeah, this card is slightly wider than a regular card, so it doesn't fit in a penny-sleeve or page.  It is destined to live in a top-loader forever.)

NUMBER THREE
The penultimate package was ANOTHER PWE BOMB. 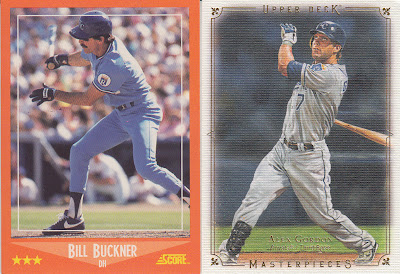 This one had two more sweet cards I needed.  A Score Traded Buckner, and the Alex Gordon Masterpieces card.

NUMBER FOUR
The last package is from the "Oddball Draft."  Hey, I'm an oddball.  I like math and wear glasses and goofy band T-shirts.  I guess that means I should participate.  Oh, it was Oddball CARDS?  I misunderstood....

Let me take a look at what JBF is offering here....and I'll do my shopping.

Royals parallels? Throw those in my cart. 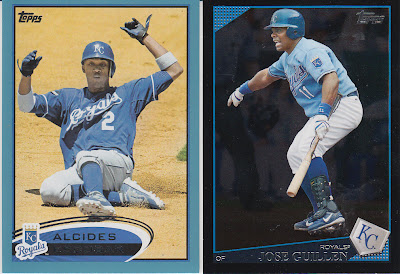 History MINIS.  Last year when Ginter came out, I decided to look up who LL Zamenhof was since I had no clue.  Turns out he invented the language Esperanto.  Nobody needs to know that, right?  Wrong.  That little piece of knowledge won me a match in my online trivia league last season.  Yes, I am in an online trivia league.  And it is glorious. 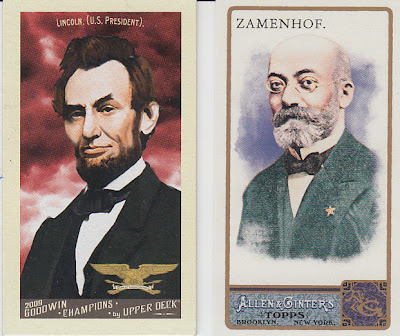 I had no idea this set existed.  I would have chased it.  Jared Ingersoll was a lawyer and VP candidate who signed the Constitution as a representative of Pennsylvania. 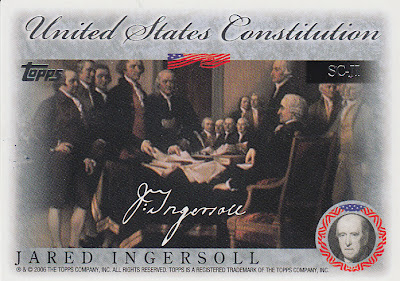 Finally....this appears to be my first "modern" tennis card.  I had to unlock the Tennis section in Zistle for this. 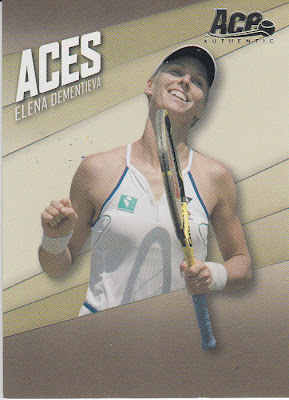