I like to keep a few sealed packs on-hand for times when I really want to open something, but don't want to head all the way to the store to buy something.  I've found one of the best ways to do that is to get the 20-pack Fairfield repacks from Target.  I've been gradually working my way through one of those for the last month or so, and was down to two packs left...neither of which particularly excited me:  a 2016 Leaf Babe Ruth pack and one remaining pack of 2015 Topps Series 1.  First I opened the Babe Ruth pack and got....cards of Babe Ruth (yawn).  Next was the Topps pack.  There had been about 4 packs of Series 1 altogether in here, and I hadn't received anything to write home about.  I wasn't expecting much from this one either, and it didn't start out promising as I read the card names from the back...


You can see where this is going...dullsville.
Brandon Belt.
Clayton Kershaw. -- Well, at least he's somebody I know I can trade.  It's the #100 card.

Etc.  Another boring pack.  However, I flip the cards over to look at the pictures on the front, and am pleasantly surprised.  The Mets team card has an interesting camo-uni photo...and the Clayton Kershaw card looked...different. 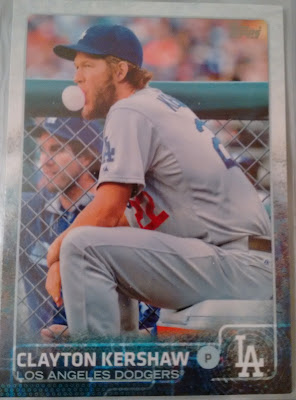 The "bubble-gum" variation.  I had forgotten this was a thing...but knew I hadn't seen this card before.  It was definitely a nice thing to see out of a Fairfield repack!

So the question to my Dodger-collecting friends is....Does anybody need it?

Can I Collect It? 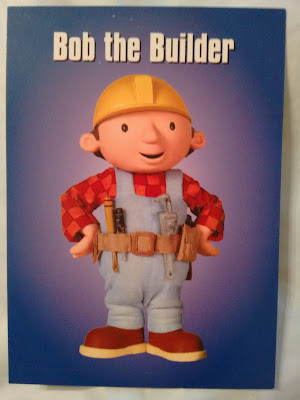 This looks like it might be an advertisement, but it is the same dimensions as a regular baseball card, so I think it can go into the oddball/non-sports binder. I have no idea where this came from, but I found it on the floor of my house.

Email ThisBlogThis!Share to TwitterShare to FacebookShare to Pinterest
Labels: Odd

The day before Thanksgiving I was going to travel from my house in Ventura County down to my in-laws house in Orange County.  However, it seemed like everyone else in the state had the same idea.  The freeways were PACKED.  I would either have to suck it up and sit in traffic going through LA, or find some way to kill time until the roads were less busy.  Kill time?  How about a card shop! 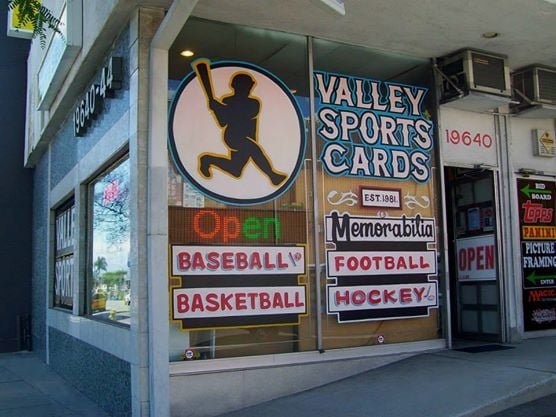 Valley Sports Cards in Tarzana is technically my "Local" card shop since there aren't any closer, but even on a good day, it's still 30 minutes away, so I don't get there often.  I think it had been about a year and a half since my last trip there.  However, it's right off the 101, so it made a perfect pit stop while I waited out my fellow travelers.
This is not a big shop...and part of their space is used-up by their picture framing business, but one thing that I knew they had in abundance last time I was there was DIME BOXES, and that was my goal when I walked in.   As I entered the shop, the place where the dime boxes had been before was now a basketball cards display.  Not to fear, the dime boxes had been relocated to the back corner.  There were probably twenty of the 3,200-count boxes packed to the gills with baseball, football, basketball, and some assorted sports (hockey, golf, MMA, etc.).

So was I able to kill time here?  Yep.  Three hours.  The end result of that was 225 dime-box cards, plus a few from the quarter and dollar boxes.  Take a look: 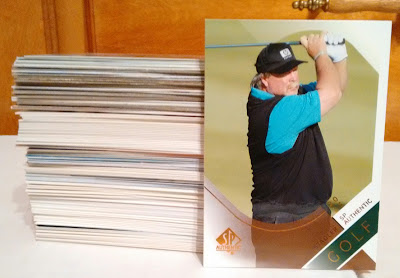 There is my stack of cards that I was keeping for myself....that's not the whole 225, since many of them were to trade away. 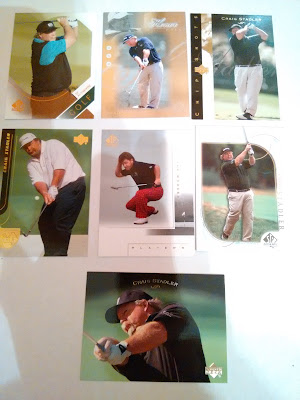 As part of my quest to collect guys with great mustaches, I felt I had to go for these Craig Stadler cards.  Ian Woosnam had some neat plaid pants, so I grabbed that one, too. 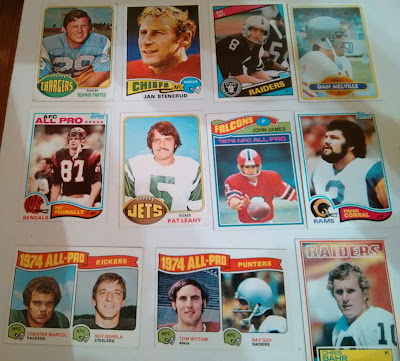 Here are some vintage Kickers and Punters that were no-brainers for ten cents. 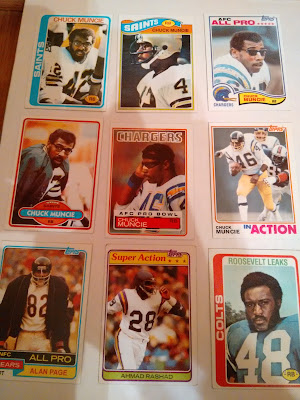 A few other vintage goodies.  There were six Chuck Muncie cards in a row in one of the boxes.  He and I essentially wear the same style of glasses.  So I knew I would need to grab my spectacle-buddy. 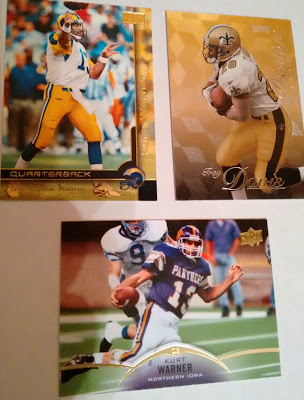 And three more for my PC...Kurt Warner and Troy Davis (Iowa State alum). 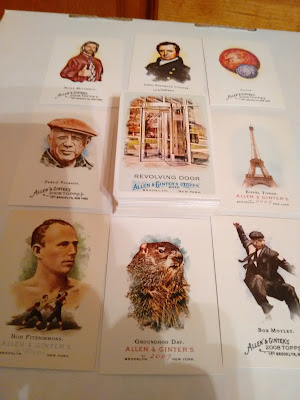 Two of the 3,200-count boxes were full of old Allen and Ginter commons, going back to 2006-2012.  As you can see from the middle, I grabbed a big stack of them, and am showing some of my favorites here.  I FINALLY got my paws on the Revolving Door card -- which is probably my favorite Ginter card ever.  I had never seen the Groundhog card before, but could not resist a face like that. 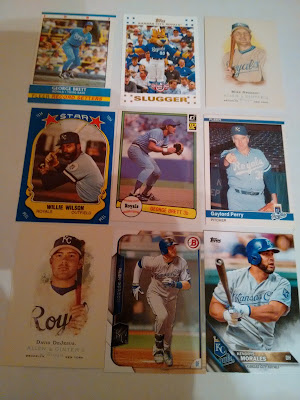 Here's a sampling of the Royals that I picked up.  I loved the Gaylord Perry in a KC uniform, and another copy of the Sluggerrr card (even though I had it already).

I mentioned that several of the dime boxes were basketball.  I only collect a FEW basketball players...mostly Kyle Korver and guys who went to Iowa State.  Because of this, I wasn't going to waste my time on the basketball boxes.  However, as I was putting away one of the football boxes, my arm brushed across the top of a row of basketball, and it opened up to this card: 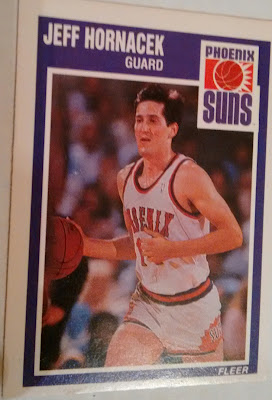 That's a rookie of my favorite Cyclone player from my early youth.  That I didn't have.  In a dime box I didn't want to look through.   :-)  It's just so freakin' cool to me. 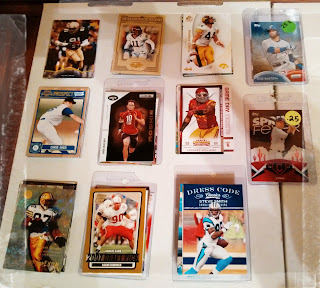 Here's several stacks of miscellaneous cards I pulled out for other traders and friends/relatives of mine.  The Carolina Panthers stack is large enough to cast its own shadow. 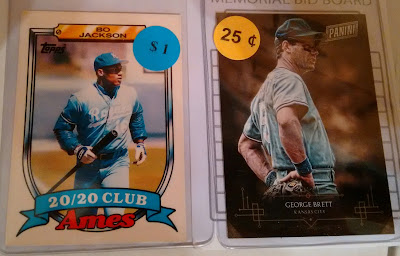 After the dimeboxes were done, I looked through the quarter and dollar boxes.  Here were two of my favorite pulls from there.  The George Brett was only a quarter for a Panini Black Friday exclusive from last year.  I'll take that!  The Bo Jackson was a little weird...mostly because I had never seen one, so was asking myself WHAT IN THE WORLD IS THIS CARD?  Apparently "Ames" was a discount/department store in the Northeast, and this card was part of a boxed set that was made exclusively for them.  I didn't know if a dollar was a good price for it, but if I have learned anything from "American Pickers" it's that the time to buy something unusual is when you see it!
As they were getting ready to close up the store (yes...I was closing them down), I noticed they had boxes behind the counter of various years from the '50s, '60s, and '70s.  I figured this would be a good chance to make a dent in my "vintage Royals" (only going back to 1969...is that vintage?) needs, and asked for the '69 box.  I was able to quickly pull out 12 that I needed before the clock struck 7:00 PM: 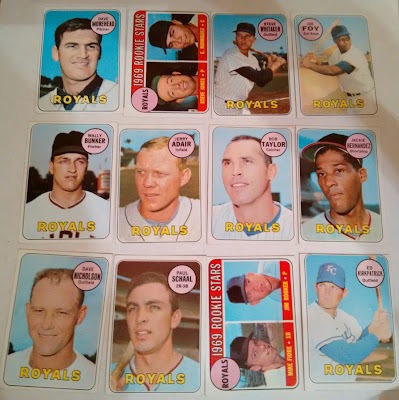 All of those, plus some more quarter-box stuff I didn't show, plus a discount for paying cash means I got everything for $30 even.  I was a happy camper!  And by the time I left, traffic was smooth sailing all the way down to the OC.  :-)

What say you -- have you ever stopped at a card shop to avoid traffic?  What about to avoid your family?  :-)