The Sheep have come home to roost!

I want to thank everyone for entering the contest this year -- I was hoping for 40 entries...and we got 74!  This is one where having more people makes the results better and the game more fun, so all of your entries (even up to the very last-minute!) are much appreciated.  We had good participation from members of the TCDB, so I appreciate you all coming over to find my blog.
I cleaned up all the results and grouped them based on what I considered to be "equivalent' results.  For example, on question #1, I lumped anyone who said Skydome/Jays/Toronto under the "Rogers Centre" bucket, but I did NOT combine "Astrodome" with "Minute Maid Park" since those are different stadiums.
On some of the questions, there was substantial agreement.  On others, you guys were all over the board.  Without further ado, here are the results:1) What is the best Major League Baseball (MLB) stadium with a roof? 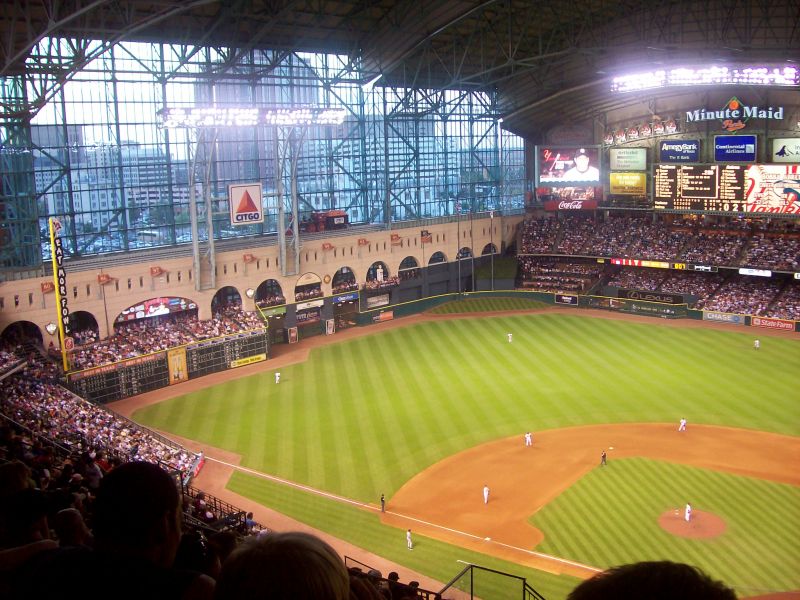 Everybody hop on the train full of oranges for a ride down to Minute Maid Park!  I can confirm that this is a great place to see a game - I saw Ichiro and the Mariners play there in June 2002, and for those steamy Houston summers, a climate-controlled stadium is essential. Moises, the youngest of the bunch, takes the crown here from his father and uncles.  He finished his career with 332 home runs, but the first thing I always remember from his career is this (almost) catch. 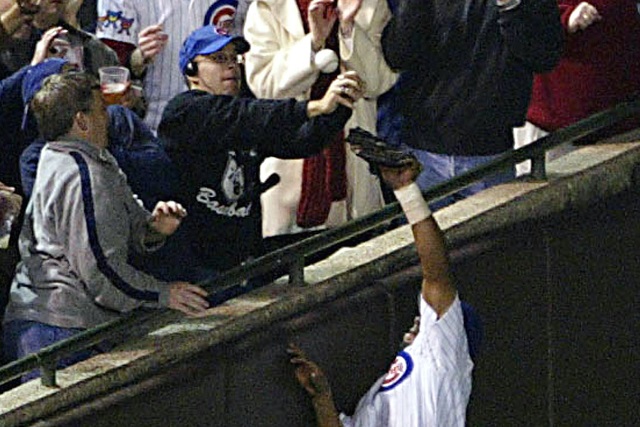 Despite what one participant wanted to put, I'm afraid there was no "Boog Alou".

3) What is the best baseball card product with no MLB team logos? There are a LOT of Panini products on here - they're really the only MLB competitors to Topps these days.  Upper Deck has given up.  Leaf is practically non-existent.  Some people won't touch these cards at all, but I like them -- I think the constraints with team licensing make them have to be a little more creative.  Except on catcher cards...all the gear covers up the logos and you can use a regular shot.  Personally, my vote was Panini Immaculate -- these cards are BEAUTIFUL.  Get on ebay or COMC and find some good ones from your favorite team.

4) What city without a MLB team most needs one?

Our french neighbors to the north are familiar with MLB.  The city itself is just shy of 2 million people, but the metro area is 4 million.  They'll need a stadium with a roof, though...maybe go talk to Minute Maid Park to see how it's done.

Commissioner Rob Manfred has mentioned he wants expansion.  Montreal, Vancouver, Nashville, Portland, Charlotte, Las Vegas, and Mexico were all on his short list.

5) Budget: How much money (in cash) should you take to a card show? 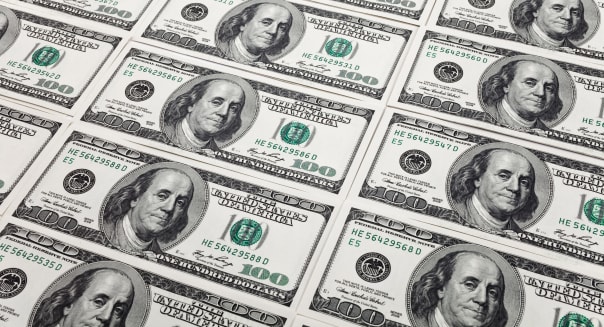 $100 feels about right.  Enough that you can get several nice things from a few different tables, but not so much that you regret going.  Or, you can get 1,000 cards from the dime-boxes - that's more my style.

6) What is the most unusual name for an active MLB player? Not only does Mookie have a good name, he's also an excellent bowler.

I had forgotten about Kevin Quackenbush, but that's a good one!

7) Who is the best MLB Mascot? 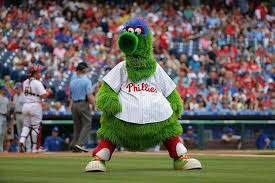 It's a runaway for the Phanatic! I hear he hangs out with Gritty.

8) Who is the best bunter in MLB history? 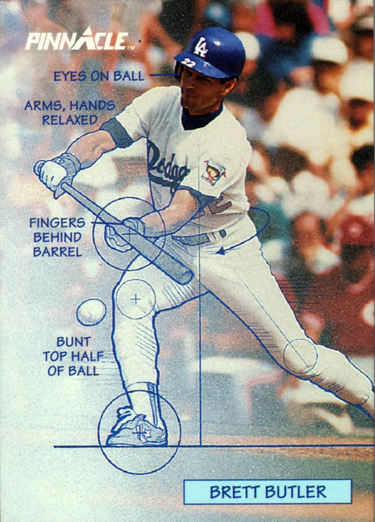 Butler leads the majors in bunt hits (and Pinnacle once used him as the "blueprint" for bunting technique), but watching Ichiro lay down those drag bunts was a thing of beauty.

9) How many "hits" (autograph or relic cards) do you expect to receive in a hobby box of cards? 2 is pretty common these days.  You get 3 in Allen and Ginter.  6 would be more of the prospect-style products?

10) What is the best professional baseball team name that is no longer in use? 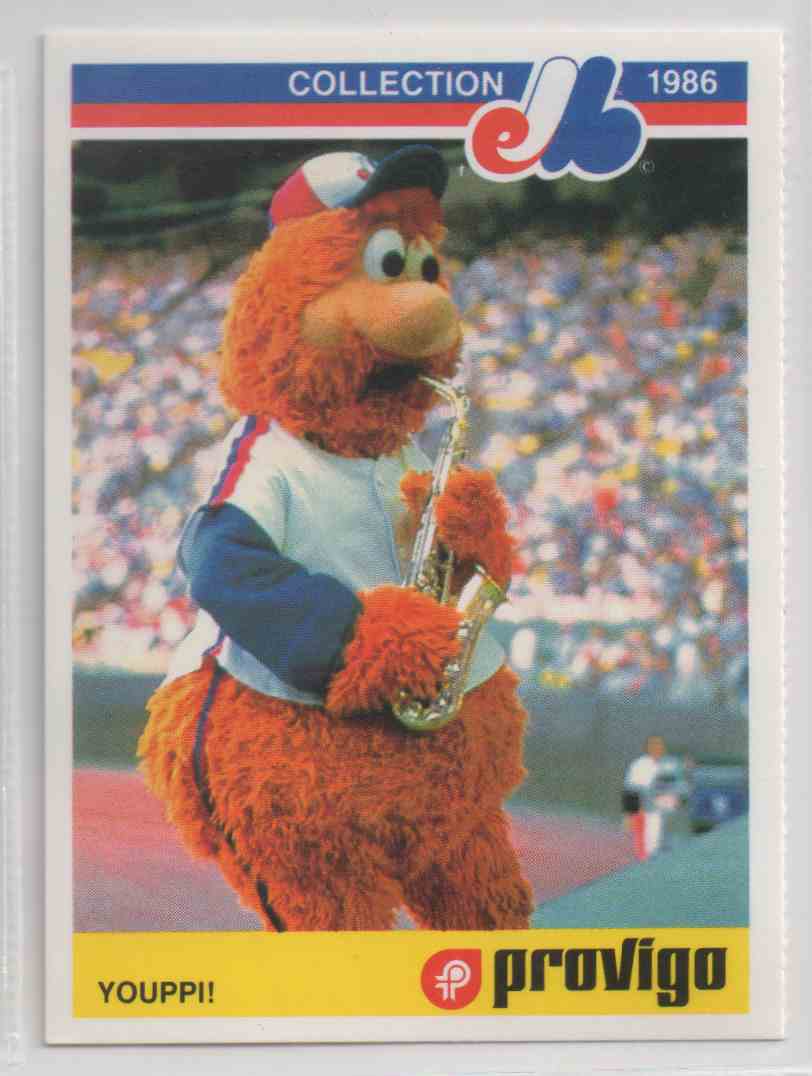 These are so good!  "Chicago Whales" and "Cleveland Spiders" have to be my favorites.  Montreal makes its second appearance in these results.

11) What is the most-useful statistic or measurement to use for evaluating how good a baseball player is?

I see the sabermetric revolution has made it to the card-collecting world.

12) Name any baseball player with the initials "J.M." I thought Joe Mauer was going to run away with this, but over half of the submissions were in before he got his first vote.  J.D. Martinez never crossed my mind.

13) What is the best baseball movie ever?

Great list!  I am glad nobody tried to include "Rookie of the Year" or "Air Bud: Seventh Inning Fetch".  I am also a fan of "For the Love of the Game" even though it is far from a critic's darling.

Side note: Last year my 8-year-old son entered his school speech contest and recited the Terrance Mann speech from this scene of Field of Dreams.  People will come, Ray...

14) Most people consider Mariano Rivera to be the best relief pitcher ever. Who would you say is the SECOND-BEST reliever? 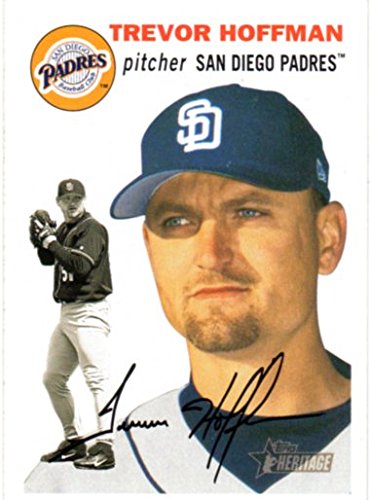 15) Who is the most over-rated current MLB player? Great answers!  I think you could definitely make a case for any of these guys.  Except Trout.  Trout is the best so how can he be over-rated?

16) What is the best food item to get at the ballpark? 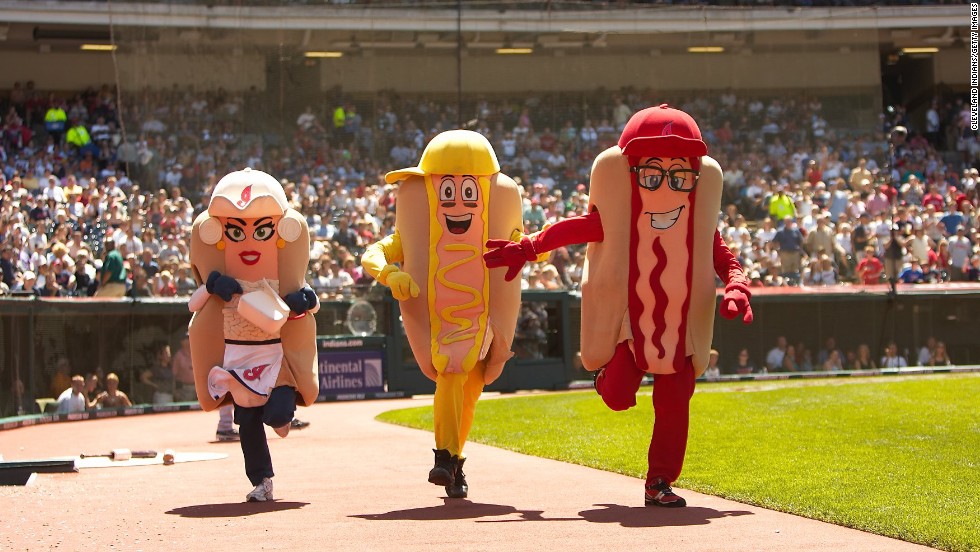 I went with the cheezy chips, and if you also picked something other than hot dog, this is really nacho day!

17) On an average day, how many minutes does a normal collector spend reading about sports cards (blogs/forums/social media/etc.)? 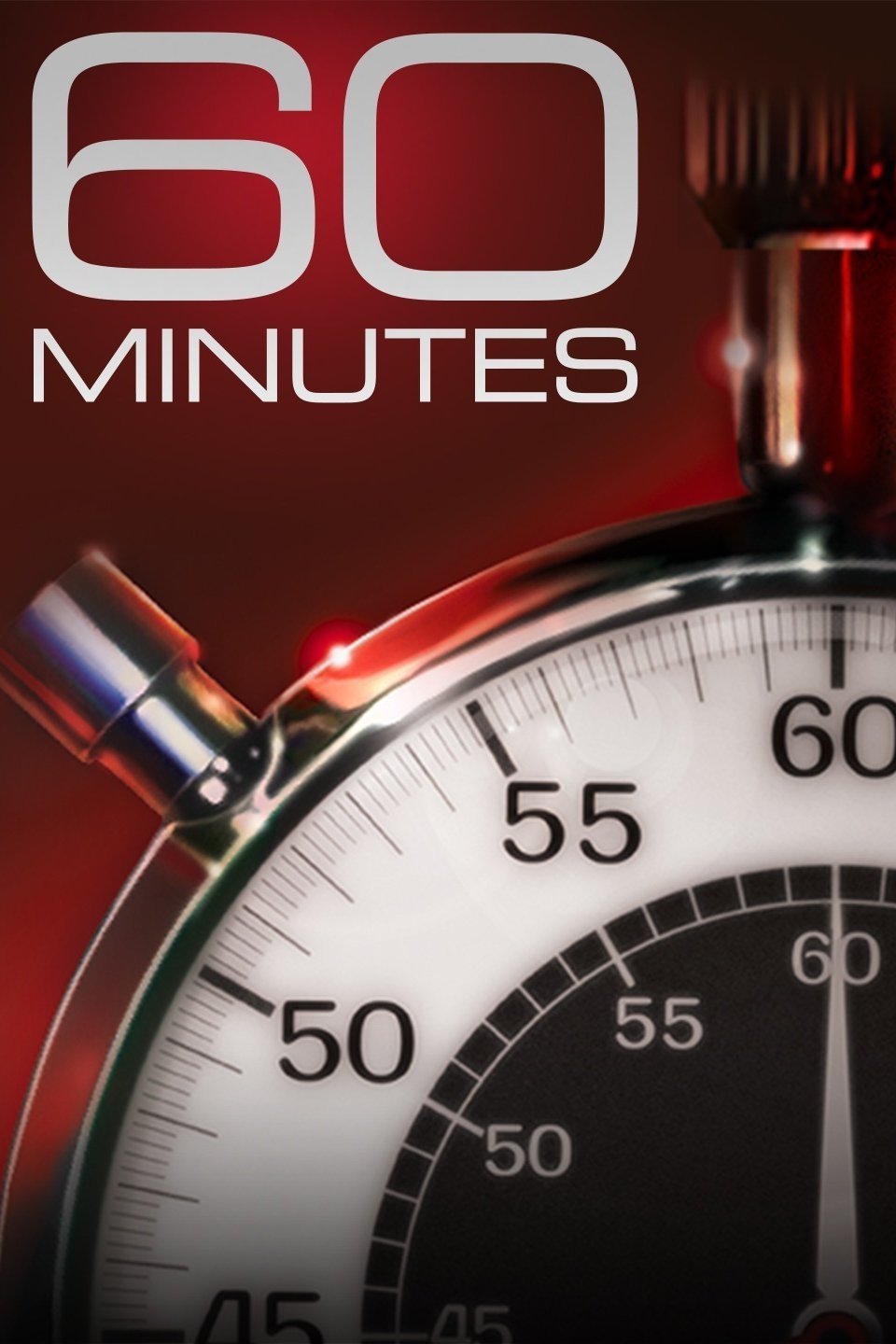 18) Vin Scully has retired. :-( Who will take up his mantle as the best current MLB broadcaster? 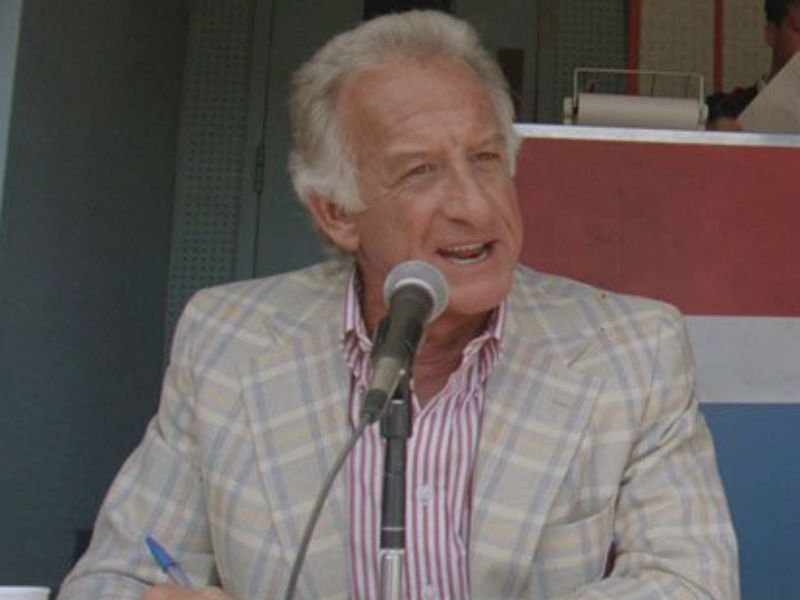 Just a bit outside...

But seriously, these are great recommendations and I am going to try to hear some of these guys call a game this year!  Shout-out to the Vasgersian fan -- nice choice!

19) For years there have been rumors about MLB contracting a team. If they would do that, which team should be eliminated?

Man, you guys really hate Florida and New York teams!  (You're not wrong)

20) What is the best song that a player could use as his batting walk-up music? 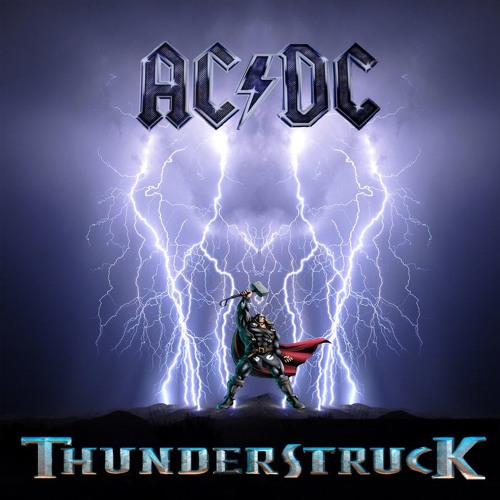 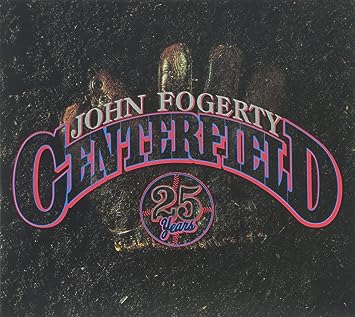 3-Way Tie!  What a variety!  I didn't think there would be much agreement here...and there wasn't.  Many of you just put down a song title, so I tried to guess which artist you were thinking on these.  I also corrected a few that didn't use the right title (i.e., the "Put Me In Coach" answers became "Centerfield").

Now that you've seen all these, do you just want a convenient way to listen to them all day?  How about this playlist!  It has all 33 songs in it.  Which one will be your new favorite?


So that's all the questions!  Great job.  As per the rules, you score the number of points per question equal to the number of people who answered the same (including yourself).  If you had been a complete sheep and used the most-popular answer on every question you would have 629 points.  Anyone over 500 did very well.  Let's see how you all did...

CONGRATULATIONS to our winner, Diamond Jesters!  He only had one question (the over-rated player) where he did not agree with a large contingent of his fellow sheep. Make sure you check out his "Time-Travel Trading" series as he tries to convert a pack of current Topps cards into the oldest cards he can.

As I also mentioned, there would be one prize pack awarded to a random entrant.  Let's do that draw now.... 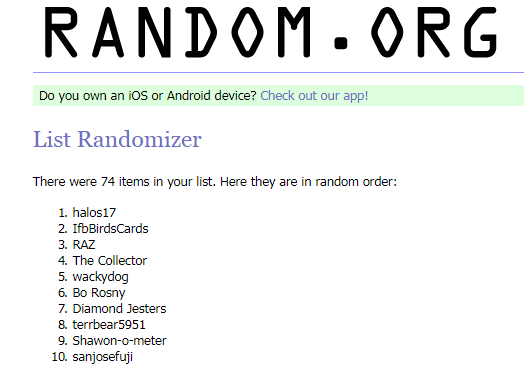 halos17 is the winner!  I will contact both of  you about your prizes.

I would love to run this game again in the future.  Thanks to everyone who entered.  If you have any comments about how this ran, or if you have any good ideas for future questions, please post them in the comments below.