My Royals collection is big, but the rest of my collections are still burgeoning.  I picked up these two guys for free off Listia.

For the Kickers/Punters collection:
For the Iowa State Basketball collection:

Drew Brees and the Eyes of the Owl

(I am WAY behind on trade package postings and purchases...this one is two months old.  Apologies to everyone who has been sending me good stuff.  I'm working on the backlog now.)

Sometimes you get something good, and then it keeps getting better.

I have had a good relationship with Night Owl.  I love his blog, and had already made a trade with him earlier.  Awhile back I posted my Dodgers Trade Bait, and he responded that he wanted the Chad Billingsley relic that I had received in Spankee's group break.  I sent that out to him along with a bunch of other stuff off his wantlist.  He fired a package back at me containing some great cards, including the Drew Brees above!  That was #1 on my Most-Wanted List!  Now I've got it -- lovin' it.

Here's a sampling of the stuff he sent me:

A Sweeney, a UL, and LOOK at that soup-strainer on Dennis Leonard.  That is STRONG.  He reminds me of my old engineering professor...

Some cool Orel Hershisers found their way in.  The Fleer has a good texture to it.  I remember buying some packs of Topps Kids in my youth.  They were cheap and fun.  Just like Donruss Triple Play. 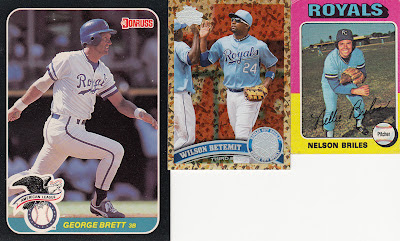 The sizing was all over the place here.  I was so confused.  Wilson Betemit was normal-sized, but very COGNAC-y.  Nelson Briles was a 1975 mini.  George Brett was WAY too big for his britches.  Seriously...his britches were a really odd size.

All that stuff was great.  It was a good trade -- some Dodgers were sent and some Royals received -- what more could I ask for?

What to do with a Sealed Box?

What do I do with this?

I want that Bo Jackson card there on the box.  That's the only card I REALLY want out of here.  There are 4 other cards (Royals or Hershiser) that I still need, but am not desperate for.

I COULD just open all the packs, but I don't want 300+ random commons to deal with. And I'm not even guaranteed to get the Bo!

Does anyone else have "needs" from this set?  Sammy  Sosa rookie, maybe?  Team collectors?

Should I try to re-sell it at another garage sale?

Should I open until I find the Bo, then throw away the rest? :-)

I made lots of trades in January/February.  Then everything went bananas and I didn't post a thing about any of them.

So here is the first of several of these trades.  I posted a bunch of Dodgers stuff back then, and Jim of Garvey Cey Russell Lopes contacted me about several of them.  He looked at my want-list and sent me a small BOX of stuff.

It was mostly Royals (naturally) -- here were some of my favorites:

Mike Macfarlane with a Play at the Plate.  Vince Coleman romancing his bat.

Heads.  Lots of  Royals heads.  Hey -- lookie there!  More Macfarlane!!  He's pointing the way to the Playoffs.  Not really.  The Royals don't make the Playoffs.

Here's a gold Randa and a wrinkled Brett.  "Gold Randa" sounds like a good name for a Private Eye.  Maybe I'll write a book starring him.  The title of the first novel will be "The Case of Gold Randa and the Wrinkled Bretts." 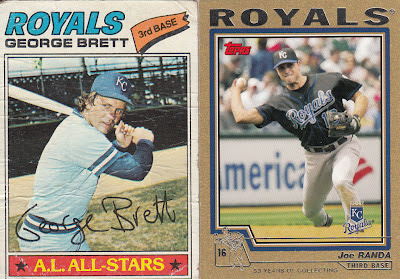 I like the 1987 Donruss design for some reason.  And the Carrasco is a weird dot-matrix serial-number. 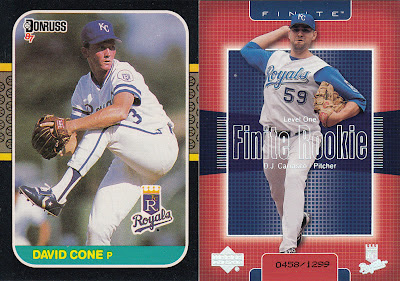 Here is a sampling of the stuff from Upper Deck - A Piece of History:

Misters Lincoln and Ponce De Leon.  Apparently the Spanish had gained colorization technology a few centuries before the Americans did.

Pink submarines and a turkey.  That's the history of America in a nutshell.

Jim threw in one more thing that I found to be....AWESOME.

That's my third Mike Sweeney relic, and I am happy to add it to my collection!

Thanks so much, Jim!

(He already posted the stuff that I sent him HERE and HERE)
Posted by Josh D. at 6:30 AM 1 comment: Links to this post