At the beginning of April, I was trying to wrap up some other trades, when Oscar -- Mr. "Stealing Home" -- from All Trade Bait contacted me out of the blue for another trade.  A few emails later, and boom - a little yellow envelope was showing up at my door.

Now, before I go any farther...my wife is cool.  She's not a card collector, but she likes looking at what comes through the mail before I put it in the boxes/pages.  She also likes the Royals, which means she knows quite a few of the players.

However, when she saw this come out of the package...she was ELATED.
The blue in the jersey pops a lot more than it does in the scan.  We all thought this card was very "pretty" and liked that it had our (former) player and Cy Young winner.  Greinke, how we miss thee.

But Oscar wasn't done.  He included this auto:
This card is not serial-numbered...but COMC tells me that this was limited to 3500, while there was also a silver version limited to 1000, and a gold version limited to 500.  That means ol' Jon Nunnally had to sit around and sign 5000 of these.  Poor guy's hand is probably still cramping.  Although that's nothing like what Marshall Faulk endured when he autographed 125k cards for the Madden games.

I also have the Keith Lockhart signature from this set.

There were a bunch of cool base cards, and the best one was this Donruss Opening Day Bo Jackson.  I had never seen one of these before, so had to do a little research to figure out what it was.

Here's all the goodies I sent him.

Thanks again for the trade!

Back in January (yikes!), I made a trade with Greg Z. from Plaschke Thy Sweater Is Argyle.  He was the prompt-posting half of this trade...posting what I sent him in February.  I sent him a Poker auto + Dodgers + Phoenix Suns.  Here's what I got in return.  The Berroa card above Greg was HAPPY to part with, and I was happy to get it.  I figured it was a jersey/shirt relic...until I looked a little closer - "Spring Training Pants."  I like to think that the card company had him changing in and out of pants all morning so they could make more of these.

Run your sprints...change your pants.

Take some BP...change your pants.

Hustle down the line....

The other relic I got out of this trade was a nice blue Brandon Marshall relic from the Broncos.  Yeah, that was 2 teams ago for him, but it's still a nice card.
I like the weird stuff, too.  One of my fun collections is "Grumpy Coaches."  Greg was more than happy to oblige me with some NBA guys, a Zen-free Phil Jackson, and old Tommy Lasorda. 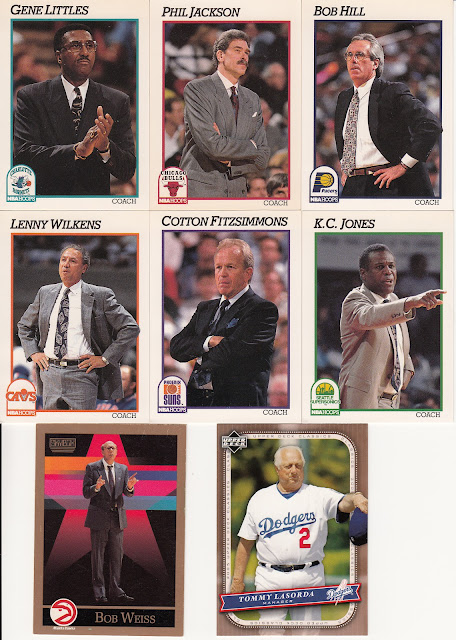 We also got an example of some fine NBA fashion.  Rec Specs + KJ's Bow-Tie.  SWEEEEEEET. 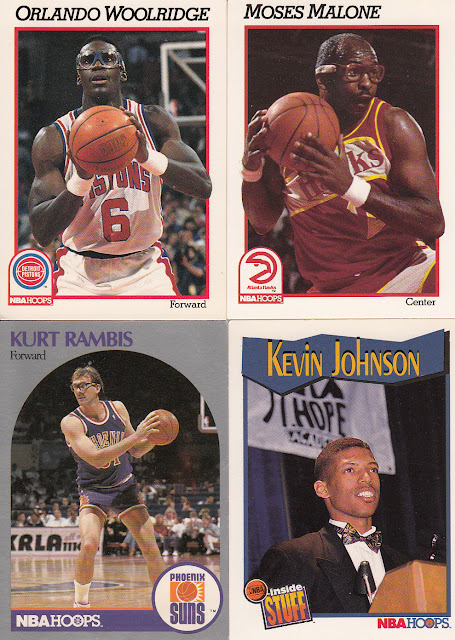 So which of these is your favorite??

Back in February, I made a trade with Jeff over at My Sports Obsession.  You can see lots of the stuff I traded him here.  It was mostly a good-sized stack of 1973 Topps and 1981 Topps.  He sent me a smaller envelope back, but it was a GREAT envelope.  He clearly looked through my want-lists and picked out some good stuff.  Here's a few of the highlights...

He started it off with 4 different Kurt Warners.

Then a Diamond King with a diecut Topps Laser card.
As I neared the end of the stack, the cards started feeling THICKER.  Here was the first one.
Considering how I didn't send him any hits.  That was awesome.

Then I flipped to the last card and found this one.
WHAT!  That is a relic auto of Ken Harvey.  It's #/25.  It's sweet.  There is an embossing in the lower left over the auto.  This is my first relic auto, and it is cool.

This is the last call for basketball cards.  If you are a team or player collector, please head over here to see what is still for trade:
http://royalsandrandoms.blogspot.com/2012/05/does-anybody-collect-basketball-cards.html

I have finished sorting all the commons into teams, so anyone who wants to trade for a team will get a pretty nice-sized stack. If you already commented on the previous post or emailed me, your stuff is in the packing process.

Respond by the end of this week (Saturday 5/19), or else it will be gone to Craigslist.

Email ThisBlogThis!Share to TwitterShare to FacebookShare to Pinterest
Labels: Basketball

Does Anybody Collect Basketball Cards?

I need to get rid of my basketball cards.

As I've mentioned before, I love buying card lots on Craigslist and at Garage Sales.  You get a lot of variety that way, and it's fun to sort through them and see what you got.  However, with that variety, you find that there will be stuff that does not suit your collecting goals, and it just ends up taking up valuable space.  That is where I am with basketball cards.  I have not paid attention to the NBA in years (since the early 90s), so the whole thing doesn't do much for me anymore.  My focus is narrowing to certain players (as seen on the sidebar to the right--->), so anything I have bought in these lots that is basketball needs to go.

I WANT TO TRADE THESE TO YOU.  I have pulled out all the "stars" (or at least those I considered to be stars) and serial-numbered cards and listed them below.  If you are a player-collector, LET ME KNOW.  I also have several boxes of mid-level players/commons.  If you are a team collector, HIT ME UP.  I'd be happy to sort through and pull out all the Denver Nuggets or Philadelphia 76ers (for example).  If you collect guys from a certain college....give me a list of names and I'll take a gander for you.  These mostly range from the early 90s through about 2007.  It is primarily base cards, but there are some inserts and serial numbered ones, too.  No relics/autos here.

Here's the list of stars along with the # of cards I have for each one.  If you want more information on what I have for a particular player, let me know.  None of these are high-dollar cards, but there are some with  COMC prices of $2-$5, so it's not all junk.  I would love to get KC Royals back in trade.  If that's not possible, I would take football or any of the basketball players shown in my want-lists.  If you wanted to do Paypal to cover shipping/supplies instead of a trade, we could probably work that out, too. Anything not spoken for will be disposed of in some as-yet-undetermined fashion.

Teams Available
Everybody Else

Last month, Brian from Play at the Plate was running a contest -- it was a Pack Wars that I ALMOST WON.    1 point too little = No prize for me. I tried to make a little joke at my expense inquiring about when I would be getting my (non-existent) 2nd place prize.

Fast forward a week, and a little yellow envelope appears in my box.  Opening it, I found the attached note. 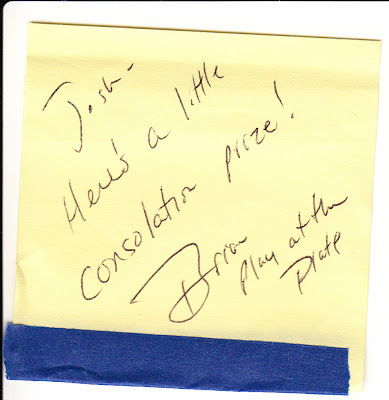 What's this????  By whining (or begging) I can get sweet free things given to me?!?!  How can I incorporate this into my everyday life?  Brian, you realize this just reinforces bad behaviors, right?  :-)  I should go whine to someone else...maybe I will start by annoying my wife. 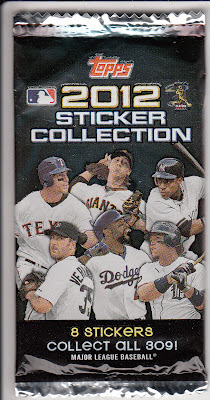 Here's what he sent....Brian sent some packs of 2012 Topps Stickers my way.  Let's crack them open...maybe there's ROYALS (I know that's what you all want to see). 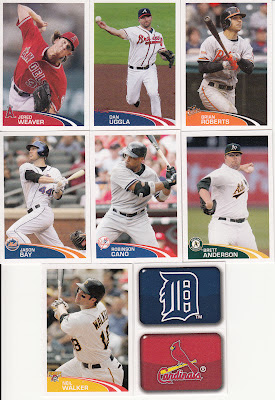 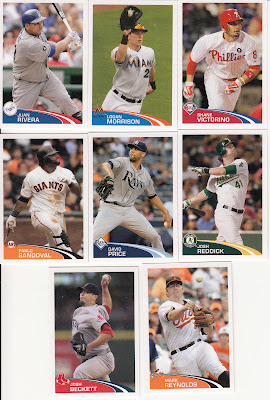 None there, either!  I guess these packs cannot be saved.   Wait....what's this in the bottom...inside a toploader?

Thanks again, Brian.  I know who to bother next time I want to win something.  :-)