Hello Readers!  It's been awhile.


Good News:  My wife is pregnant with our third child (our first daughter)!
Bad News:  This has been a rough pregnancy for her, so I've been taking on a lot more of the care for the house and our older boys....thus minimizing my baseball cards time the last two months.  That's what's causing the delay in my posting.

However, those big boxes from my Craigslist purchase have been calling my name again, so I wanted to at least go through the last layer of Box #1 to see if there was anything else good in there.  I had originally hoped to keep a full record of each set that came out of these boxes and how many cards from each set I have.  But that was slowing me WAAAAY down so I'm scrapping that.   I'll just be posting the highlights and sets that have a significant amount of cards in case anyone is putting those sets together.  Hopefully that will get me through these a lot quicker. 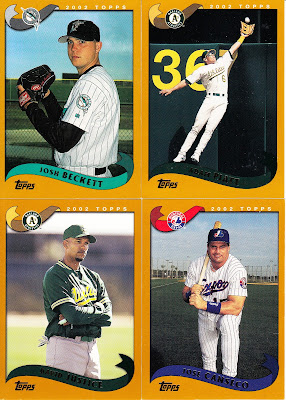 Starting simply, this layer had a pretty sizable chunk of 2002 Topps flagship if anyone is looking for some of those. 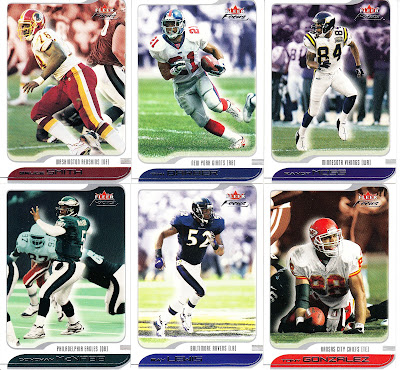 Next up was a bunch of 2001 Fleer Focus Football, including a bunch of (future) Hall of Famers.  Lots of commons, too.

Right after those football cards, I saw this thing.  Hockey?  OLD school hockey?  What's that doing in here with all these modern sets?  I am not a hockey collector, so I have never seen anything like it before. A little research turns up that it is a 1969 Topps base card.  Still looks pretty cool to me!  That ties the Roy Hilton football card for the oldest one to come from these boxes yet. 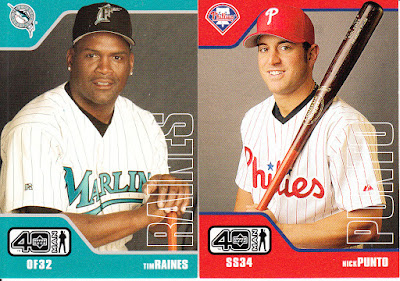 Digging deeper, there was a decent chunk of 40-Man also...including these two guys that I do not associate with these teams at all.  Raines is an Expo and Punto is a Twin in my mind's eye. 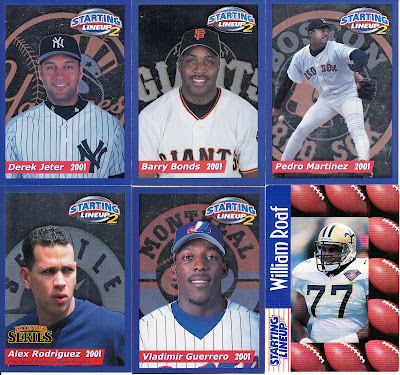 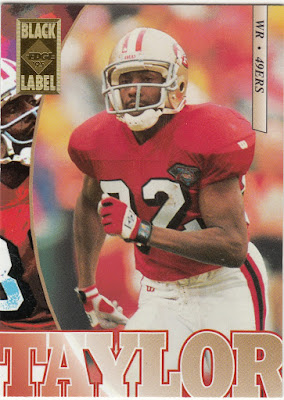 This card doesn't look like much in the scan, but it's VERY nice in person.  It's 1995 Black Label, and it's printed on stock that feels a little like acetate, but is not fully clear.  It gives the picture a very crisp, HD look.  There's a dot-matrix serial number on the back, but it's pretty large, so I don't think the print run was too limited on these. 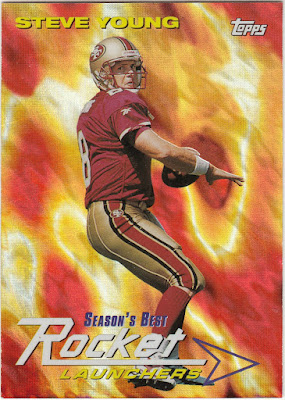 Speaking of another card whose scan doesn't do it justice, tilting this one in the light makes that background light up like flames.  Steve is trapped in the inferno! 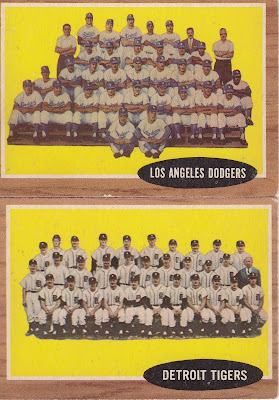 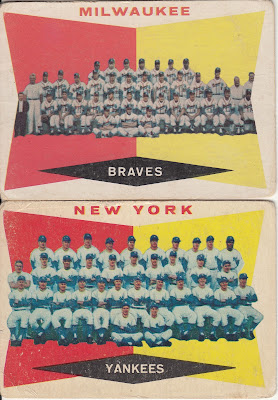 And then finally these!  1960!  That Yankees card has quite a few stars on it.  None of these 5 was in pristine condition, but they are still pretty nice things to add to my collection, as I do not usually go after anything older than the founding of the Royals (1969).

In conclusion, please comment below and answer one or both of these questions:
1) Which card of these do you think is the most interesting?
2) Which athlete should I name my daughter after?  Her brothers think "Luke Skywalker Girl" is a good name for her, and I need some alternatives...